'IF THAT DIAMOND RING TURNS BRASS' IS A FREE RELEASE: view the videos directly on the site.

This project is companion to the programme called 'Close your eyes and I'll close mine' that Anna McMichael and Tamara-Anna Cislowska started performing around Australia in 2012. Next to selecting a repertoire of late 19th and early 20th century lullabies, Anna McMichael, curator of the project, commissioned some composers to write new ones, forming a collection of lullabies old and new. She also asked Isabelle Vigier to create video projections for the project. Isabelle has based her work on the deconstruction of the lyrics in lullabies of various heritages. Recontextualizing words and images, she composes an abstract berceuse, around the mysteries, the fears and the peace that come with the act of falling asleep.

The australian label Tall Poppies has released the full collections of the lullabies in the original programme as a CD, including, next to the works featured on Unsounds, works by Igor Stravinsky, Robert Ashley, Graeme Koehne, Brett Dean, Elena Kats-Chernin, and Cor Fuhler.

'Close your eyes and I'll close mine'  is available via Tall poppies. 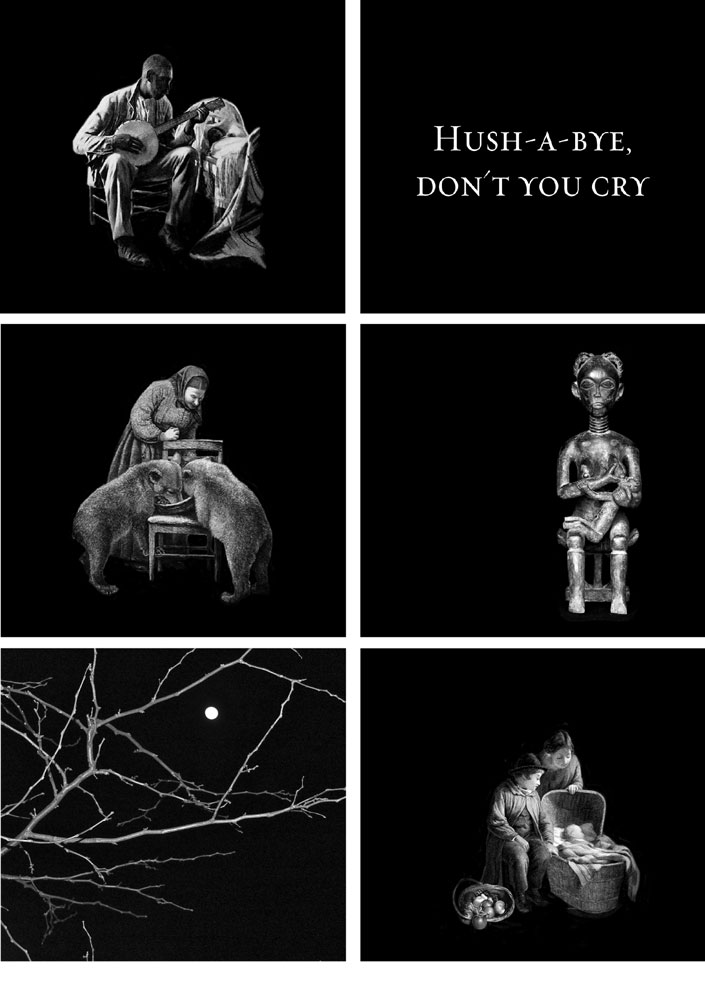 Anna McMichael is an Australian born violinist who returned to live in Australia in 2010 after 17 years in Europe performing in many of the major ensembles and orchestras. Anna has performed at many European music festivals with a number of Dutch chamber ensembles and toured extensively with groups such as the London Sinfonietta, Amsterdam Sinfonietta Chamber Orchestra, Nieuw Ensemble, ASKO/Schoenberg ensemble, Netherlands Chamber Orchestra, Ensemble Modern, the Royal Concertgebouw Orchestra, and recorded for a number of European labels. In Australia, Anna has performed at 4 Canberra International Music Festivals as guest artist, been guest Associate Concertmaster of Adelaide Symphony Orchestra, guest Concertmaster of Orchestra Victoria and performs with a number of different groups as well as projects of her own around Australia.  Anna is Co-Director of the Tyalgum Music Festival.

David Chisholm has an international practice defined through diverse and hybrid collaborations for which he has won many awards internationally (including one for Axeman Lullaby). David’s work has been appeared at Venice Biennale, Edinburgh and Melbourne Festivals, and many more festivals around the world.  He has been performed and recorded by contemporary ensembles and orchestras.

Andrew Ford is a composer, writer and broadcaster, and has won awards in all three capacities. His music has been played throughout Australia and in more than 40 countries around the world.  A former academic, Ford has written widely on all manner of music and published several books. He has written, presented and co-produced four radio series, including Illegal Harmonies and Dots on the Landscape, and since 1995 he has presented The Music Show each Saturday morning on ABC Radio National.

Kate Moore is an Australian musician and composer of new music based in the Netherlands. Active on the international scene, Moore has had works performed by acclaimed ensembles including ASKO/ Schoenberg, The Bang On A Can All-Stars, The Amsterdam Cello Octet and Ensemble Klang and her works have been performed in major festivals. She composes and performs works combining electro-acoustic sound worlds with traditional instruments pushing the boundaries of performance practice into realms of installation  and performance art simultaneously maintaining a profile in mainstream venues.

Isabelle Vigier is a visual and graphic artist based in Amsterdam. The nature of her projects ranges across the fields of dance, music, art & culture, and the publishing world. She is often a long term partner for musicians’ ensembles, record labels and theatre- and dance companies. As a visual artist she makes installations and image series next to collaborative works, often in relation to dance projects or music performances. Isabelle is co-founder of Unsounds.