SOUNDS OF THE YOUNG AVANT-GARDE VOL. 02. Gaudeamus foundation and the independent label Unsounds are indispensable actors in the avant-garde and new music field, operating internationally from their common base in the Netherlands. With the Sounds of the Young Avant-Garde Vinyl Collection, they collaborate to present some of the most forward moving sounds in contemporary music, as they are created today by young and mid-career makers. The works are original commissions by Gaudeamus and are selected, produced and released by Unsounds. This joint venture secures a new lease of life for these works apart from and beyond the live music stages, ensuring the most thrilling music of our day and age is preserved as veritable future classics.

In the summer of 2014 Gaudeamus brought together audio-visual artist Zeno van den Broek (b. 1982) and composer Gagi Petrovic (b. 1986) and commissioned a large scale composition project. The electro-acoustic piece Ob-literate is the duo's resulting work for organ, vocal ensemble, electronics and custom built performative objects – world premiered at Nicolaikerk, Utrecht on 6 March 2016.

Drawing inspiration from articles revolving around the philosophical text The Destructive Character by Walter Benjamin, furthermore distilling words and concepts from interpretations by Dick Raaijmakers and the poem Étui by Adam Staley Groves, the two artists constructed a work which is intense and alienating in its deconstructive dismantling to create space for something altogether new.

Starting out Ob-literate presents itself as a dense, intangible moving mass of sound. Little cracks offer a view to what’s hidden beneath. Following an explosion, constituent elements are thrown wide, moving through separating paths - towards isolation. On their own all 'particules' find their equilibrium, without actively engaging in relations, although there might be some harmony or friction. A stray element deserts and the balance is rocked into implosion. High pressure forces connections, leading to collapse on itself. With the veil of obscurance lifted: the mark has been made, but damage was done by uncovering the underlying message and the disastrous disintegration is revealed.

The storm of this exhilarating centrifugal composition throws up atomised memories of melodic syntax, hints of a phrase or just a word. In Ob-literate these tiny points reference musical coherence and terra firma in a buzzing rhizomatic web of contingent yet tightly controlled aural material. Ultimately Ob-literate blows holes in card houses of fixed ideas or walled-off bubbles – throws open windows and points to the clearest of blue skies as a tabula rasa for our cacophonous times. 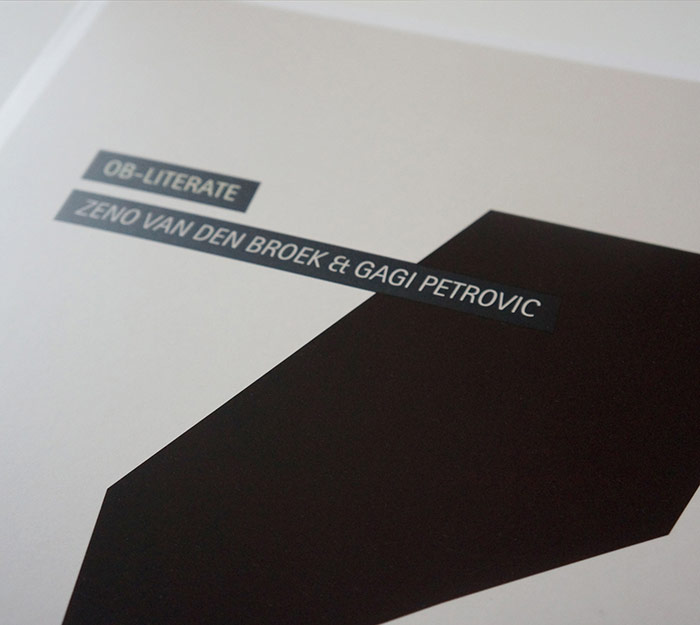 Zeno van den Broek is a Dutch-born, Copenhagen-based composer and artist. Van den Broek works in a multi-sensory way to research and express physical, social and acoustic notions. He utilises immaterial, digital and temporal means to create site and concept specific works. This trans-disciplinary method has a strong conceptual foundation, originating from a background in architecture, which enables Zeno to comprehend and reveal the richness and complexity of spatial, visceral and physical percep- tion. He works with a characteristic artistic language based on minimalist and fundamental elements such as sine waves, lines, noise and grids. With these means Van den Broek works on the intersection of visual and auditory perception.

Gagi Petrovic is a composer, performer and teacher of music. As a musician he mainly works in performative settings, such as concerts and contemporary dance. He writes pieces and songs with elements that are acoustic and electronic, intense and intimate, something between the unheard and familiar. He has a special interest in how music moves us both physically and mentally; how such abstract languages enable us to reflect on a particular sense of reality, escape or question it.