Alessandro Bosetti returns to Unsounds with Family of Three (Band Photo) : it is the fruit of urgency and sediment – a vibrant story bringing together sounds, images and texts that have emerged over time in Alessandro Bosetti’s imagination, in his life experience and through live concerts. Tangents, ideas and themes revolve around cautiousness, desire, Italy, ways of doing, uncertainty and longing. Without definite focus on one subject, these all feel like universal aspects of humanity falling into the vortex that is the whole of this Gesamtkunstwerk.

This new LP by Trophies projects a free flowing vision of urbanised living; lives lived speeded up and slowed down in unequal measures, where one grasps at straws of control and holds on to what is dear.  The Bosetti-Negal-Buck trio continuously aims to keep the threefold dialog open and inviting, breaking the repetition of loops – speaking, instead: volumes in shared exchanges. Like a constant flux questioning of the bonds of habitual versus the pull of the unfamiliar: like a chance meeting on the dissecting table of the everyday street, with open ears and eyes.

Differently from other records by the band (consisting of Alesandro Bosetti on voice and electronics, fretless electric guitar player Kenta Negal and Tony Buck on drums), Family of Three was not recorded in one shot or just a few studio days. The recording came together as a constructed object over almost three years of separate recordings and montages.

Family of Three (Band Photo) is also the latest volume in the Stories-series on Unsounds. On the label’s invitation, Michela di Savino shot portrait photographs of random trios – common people and colourful backgrounds, three individuals who do or do not know each other. Snapshot portraits of teams of three; families, bands, co-workers, fellow travellers? Her pictures explore and explode the tripartite identity of the trio by operation of more (or less) chance,  aiming to explode the ‘family of three’ (the band) into a larger community. The images feed back on the music on record; the sounds inform the photographs – oscillating in an interactive narrative moving between juxtaposed poetics and aural-visual collage, furthermore enhanced by the lyrics and Bosetti’s prose.

Alessandro Bosetti is a composer, performer and sound artist whose works delve on musicality of spoken language, utilising misunderstandings, translations and interviews as compositional tools. His works for voice and electronics blur the line between electro acoustic composition, aural writing and performance.

Kenta Nagai is a guitarist, audio-visual artist and performer, originally from Niigata Japan. His keen sense of physicality is reflected in his current exploration of the physical properties of sound and its impact on human emotion and the body. This interest has led to numerous collaborations with dancers and artists across diverse media, in the United States and abroad. Nagai's original work and collaborations have been presented at international venues and festivals including Carnegie Hall (USA), Impulstanz Festival (Austria), Movement Research Festival (USA), Roulette (USA), Smithsonian Institute (USA), Niigata Water and Land Festival (Japan), and the Whitney Museum (USA). In 2011, Nagai made a year-long sojourn back to Japan, where he studied shamisen with Tsuruzawa Asazo the 5th, and participated in the daily routines and cultural traditions of rural Japan.

Tony Buck is regarded as one of Australia's most creative and adventurous exports, with vast experience across the globe. He has been involved in a highly diverse array of projects. Apart from The Necks, he is probably best known as leader of hardcore/impro band PERIL, a band he formed in Japan with Otomo Yoshihide and Kato Hideki. After moving to Europe, and has involved himself in many projects, including the development of new "virtual" MIDI controllers at STEIM in Amsterdam.

Michela Di Savino, Swiss-Italian photographer and art director. Her current research relates to her background in dance and performance, and is turned to Therapeutic Photography and development of artistic projects related to cohesion and social behaviors; essential in her projects is experiential verification.  She is developing a series of photography works, based on a review of the "Made in Italy" and on Healing Art and Photo Projection. 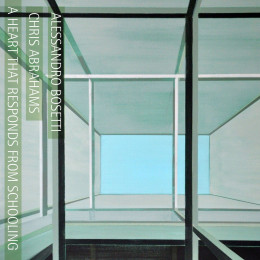 A Heart That Responds to Schooling is the second album recorded by italian composer and performer Alessandro Bosetti and Australian pianist Chris Abra..